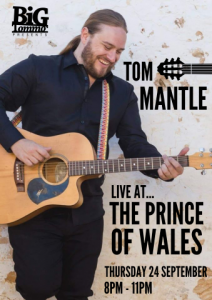 Hailing from Perth’s northern beaches, Tom Mantle is a singer, songwriter, musician, MC and promoter being the director of Perth based promotion company ‘Big Tommo Presents’. Born into the arts, Tom began dancing at a young age and went on to complete a BA in contemporary performance with a focus on theater. Leaving dance and acting behind over the years Tom’s main focus became music and his original band ‘The Midnight Mules’ are known as a mainstay in the Perth music scene, having performed at numerous Perth festivals as well as touring nationally and internationally. When performing solo, Tom brings an energy to the stage that only years of performing can create. Using a loop pedal, he fleshes out his songs laying down beats, harmonies and grooves creating a party band experience as a one man band. Always being left of field, Tom chooses not to play the usual selection of covers, instead mixing up his set list with bangers from the likes of TLC, Coolio & Christina Aguilera, with select originals and bangers thrown in!