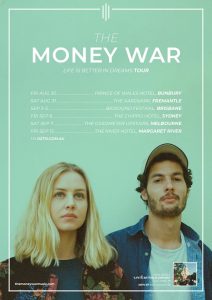 Just three months after the release of their debut album ‘Home’, The Money War are back with their new single ‘Life Is Better In Dreams’, the title track from a new EP. The Money War are touring nationally in support of the EP including showcasing at Bigsound.

The track was inspired by a recent trip back to Ollivierre’s homeland: the Caribbean island of Bequia. The result was a creative period where Ollivierre and Pepper penned an album worth of new songs. “It’s been 10 years since I visited and it’s reconnected me with a stronger sense of who I am,” he says. “It’s such a different way of life over there and a lot of things made sense – the way I am, the kind of music I gravitate towards”. This shines through in the new EP with some deeply personal songs that come as a direct response to their lives over the last few months.

Since their formation in 2015, their success has seen them touring nationally with the likes of Meg Mac, Dope Lemon, Holy Holy, Neil Finn, and playing festivals both at home and abroad (Southbound, FOTSUN, SXSW). They’ve amassed over a million streams and multiple playlist adds on Spotify, secured airplay on radio stations across the globe including BBC6 (UK), KCRW (USA), NPR (USA) and cracked college radio charts in the US. In Australia, multiple singles received airplay on RTR, FBi, 4zzz and Double J, and “Recall” went on to be Triple J’s 5th most played track of 2017.