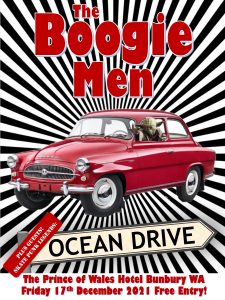 The Boogie Men play at the Prince on Friday 17th December 2021 joined by guests:
Ocean Drive.
A Boogie Men show is raw, relentless and real. And real fun!
Emerging from the studio where they have been recording their debut release, The Boogie Men will
blow out the cobwebs at their favourite venue, The Prince of Wales Hotel. Asked why they had
taken so long to commit their catalogue of rocking originals to tape, guitarist and vocalist Craig
Best explains “we have done plenty of recordings and demos but nothing worthy of release. This
time we have gotten serious, upgraded our equipment and put in some hard yakka to make
something really special.”
Best is joined in the band by drummer & vocalist Damon Buckley and bassist Leon Buswell, and he
describes their set-up. “I tend to shred away on the guitar and jump around like a fool, while the
rhythm section keeps it solid as a rock, bolted to another, bigger rock. But don’t get me wrong,
they’re not boring, when the time comes those guys wail on their instruments like nobody’s
business!”
Indeed The Boogie Men are known for being a power trio that combine catchy riffs with heavy
guitars in a dynamic stage show. “We don’t play often so when we do it is an event, a happening if
you will, and we put everything into our performance” says Best. It seems this is an experience not
to be missed.