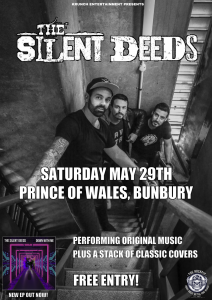 Hailing from Perth, The Silent Deeds draw on influences from a variety of styles including Foo Fighters, U2, Pearl Jam, Red Hot Chili Peppers, and The Beatles.

The band have been active in the Perth live scene for a few years now and have released two EP’s – ‘Desert Town’ and ‘Down With Me’ as well as a string of singles including ‘Rusty Chair’, ‘Here We Go’, ‘The Race’ & ‘Come Alive’ while pulling in crowds at various venues in Perth and around regional W.A.  Most recently they launched their video clip to ‘Ghosts’ which was shot in the historic Fremantle Prison late at night.

As the official musical act of the 2019 WAFL Grand Final at Optus Stadium in Perth ‘The Deeds’ joined a select few superstars (Queen, U2, Taylor Swift, Eminem) that have performed their original songs at the 60,000 seat-stadium.

The Silent Deeds will be bringing their three-hour covers & originals set to Prince of Wales on Saturday 29th May and promise to entertain with a funk-rock party atmosphere, which will have you shakin’ and movin’ all night long!