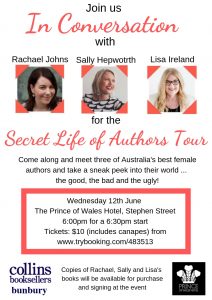 Rachael Johns is an English teacher by trade, a mum 24/7, a chronic arachnophobic, a Diet Coke addict, a podcast junkie and a writer the rest of the time. She rarely sleeps and never irons. A lover of romance and women’s fiction, Rachael loves nothing more than sitting in bed with her laptop and electric blanket and imagining her own stories.

Sally Hepworth is the bestselling author of The Secrets of Midwives (2015), The Things We Keep (2016) and The Mother’s Promise (2017), and The Family Next Door (Feb 2018). Sally’s books have been labelled “enchanting” by The Herald Sun, “smart and engaging” by Publisher’s Weekly, and New York Times bestselling authors Liane Moriarty and Emily Giffin have praised Sally’s novels as “women’s fiction at its finest” and “totally absorbing”. The Mother-In-Law is Sally’s newest novel published in April 2019.

Sally’s novels are available worldwide in English and have been translated into 15 languages.

Sally lives in Melbourne, Australia with her husband and three children.

Lisa Ireland bio:
Lisa Ireland is an Australian bestselling author, who lives on Victoria’s Bellarine Peninsula with her husband and three (big) boys. She loves eating but not cooking, is an Olympic class procrastinator and (most importantly) minion to a rather large dog.

Lisa’s fifth novel, The Art of Friendship, was published by Pan Macmillan in May 2018.