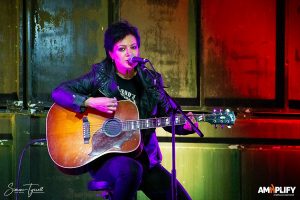 When The Superjesus hiatus began in the early 2000s, Sarah’s solo career soared. Releasing a number of EP’s and collaborations with The Living End’s Chris Cheney, The Tea Party’s Jeff Martin, and the Baby Animals’ Mick Skelton, and a side project band called ‘Screaming Bikini’ that solidified her musical ability across a range of genre’s including hard rock, singer/songwriter, 50s & 60s barber shop and electronica.

Sarah’s collaborations with DJ’s from all over the globe resulted in her single “He Doesn’t Love You” topping the dance charts at #1 in Eastern Europe for 16 weeks.

Living in London and New York before returning to Australia to reform The Superjesus to an overwhelming response, Sarah continues to uphold her reputation as a musical force, nominated for “Frontman/woman Of The Year” in Triple M’s 2015 Rockies Awards amidst heavyweights Dave Grohl and Jimmy Barnes.

Following a series of sold out “She Who Rocks” tour dates, a new release from The Superjesus imminent and a new solo record in the works, Sarah McLeod has proven to be of Australia’s most talented and versatile artists.

Following a series of sold out “She Who Rocks” tour dates and a new EP release by The Superjesus, Sarah McLeod has proven to be of Australia’s most talented and versatile artists.

2017 will see the release of Sarah’s next solo album, and an induction into the South Australian Music Hall of Fame.