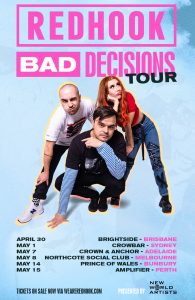 Unrelenting and infectious, ‘Bad Decisions’ is two and half minutes of cathartic alternative rock, led by the relatable, and, at times, uncomfortably honest lyrics of lead vocalist Emmy Mack. Featuring gang vocals from a bunch of RedHook’s mates in Yours Truly, The Dead Love, Grenade Jumper, FANGZ, Down For Tomorrow and The Last Martyr, the confessional punk rock singalong hurtles through its blistering guitar solo to its ecstatic finale.

Mack describes ‘Bad Decisions’ as a “self-loathing anthem”; “I always joke to the boys that it’s my theme song,” she laughs. “I wrote it when I was feeling depressed as fuck, trapped in a spiral of self-destructive behaviour and making a lot of *checks thesaurus* questionable life choices that only served to intensify my rubbish headspace and feelings of deep self-loathing.”

She continues, “(‘Bad Decisions’) is me reflecting from rock bottom on how on earth I went from being a straight-edge, dux-of-my-Catholic-school goody-two-shoes to feeling like a totally lost and fucked up mess of an adult. It’s me laughing at myself and, I guess, trying to take something positive away from all it all. Hopefully someone else out there can relate.”

To coincide with the release, the band have announced an accompanying Australian headline tour, including shows at The Brightside in Brisbane, Crowbar in Sydney, the Crown & Anchor in Adelaide, Northcote Social Club in Melbourne, the Prince of Wales in Bunbury and the Amplifier in Perth.

Prior to the worldwide pandemic, the band toured relentlessly, including multiple headline Australian tours and a debut UK/European tour. This also included appearances at Download UK, Good Things, BIGSOUND and Halloween Hysteria 2019, as well as supporting the likes of The Amity Affliction, Sevendust, Hands Like Houses and Ocean Grove.

In the coming weeks, RedHook will reveal an accompanying music video for ‘Bad Decisions’.