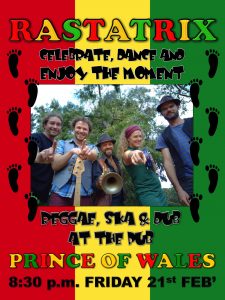 Rastatrix bring their reggae vibrations to The Prince of Wales, Bunbury, on Friday 21st of February.

Fresh from a south-west mini-tour and recording session, Rastatrix are ready to perform an uplifting mix of roots reggae, Ska and dub for you.

Rastatrix music is full of surprises, as they incorporate elements of jazz and rock into their stimulating sound.

While Rastatrix play a selection of classic reggae tunes (and other classics with a reggae twist), original music is a large part of the band’s focus, and they’re known for their catchy dance songs.

Rastatrix have been recording their Ska-punk song ‘Business As Usual’ between recent shows in Dunsborough and Margaret River, and the track will be released soon.

Rastatrix have been performing around the south-west of W.A. since 2011, opening shows for Dragon, Kooii, Sticky Fingers, with shows at Fairbridge and Harbourside Festivals, Bob Marley Outernational Day and many more.

You can hear Rastatrix from 8:30 p.m. on Friday 21st of February at The Prince of Wales Hotel, 41 Stephen St, Bunbury.