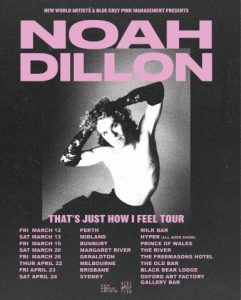 That’s Just How I Feel was recorded at Debaser Studio with our producer Andy Lawson. The song has Claudia Genovese playing bass, Jack Hill on the drums, Sam Rocchi on lead Guitar, And myself on rhythm guitar and vocals.

I wrote the song towards the end of 2020 in a stream of consciousness. Lyrically the song is

about the things, people and events that make me feel like shit in life and how being with

someone you love and being yourself is the perfect anecdote to that feeling. The song is meant to encompass freedom in individualism and being who you are.

I think 2020 built up a lot of frustration in people and I wanted this song to be an anthem for holding onto the people you love, your beliefs and not caring about what lays outside of that.

2020 was a big year for Noah Dillon. The 3 singles over the course of the year grew their audience nationally and internationally with all singles hitting over 100,000 hits on Spotify, picked up for national radio rotation on Triple J, and coming in as the 4th most played artist for the year on Triple J Unearthed.

On the live stage the band have been lucky to get back to work, touring around WA and doing sell-out shows in Fremantle. The band were selected to play Australia’s first COVID safe festival in Good Day Sunshine festival, Noah performed digitally on the first Isol-aid festival, and signed to the very reputable New World Artists. Glowing praise for the singles “Sunburnt in July” and “Mathew McConaughey” propelled the band into the hearts of Australia, and the more recent tear jerker “Knievel Daredevil” saw Noah’s songwriting evolve and voice shine.

The Noah Dillon band will hit the road touring nationally for the first time since 2019.

THAT’S JUST HOW I FEEL out February 19