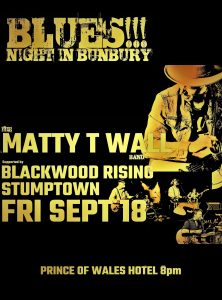 The Blues is Back Baby!! Back in Bunbury.
The explosive Matty T Wall band teams up with locals, Blackwood Rising and Stumptown to put on an epic night of blues grooves at the Prince Of Wales Hotel, Friday September 18, with FREE ENTRY. Yes…. FREE ENTRY. This is not to be missed.
8:30pm-9:10pm = Blackwood Rising
9:30pm – 1045pm = Matty T Wall band
11:05pm-11:45pm = Stumptown
The Matty T Wall band is gritty, greasy, pumping blues in all its glory.
Now having seven nominations in the prestigious Independent Blues Awards in the USA and three Number One Australian Blues albums, this is band you don’t want to miss.
Perth’s own Drum Legend, mister Ric Whittle is on the beats and joining him is the fiercely talented Leigh Miller on bass, as this rhythm section, the most successful rhythm section of the legendary Vdelli, backs up a one Matty T Wall on vocals and guitar.
Matty has been getting praise from all around the world for his mix of blues and metal guitar playing, bringing a welcome edge to the standard blues-rock vibe, to take it into the future.
“Matty T Wall, an extraordinary blues-rock guitar player, singer, songwriter. Echoes & elements of rock from the 60’s, but Wall’s voice hurls it into the 21stcentury, his dazzling guitar licks and solos not of this world. Wall is entitled to a little swagger—he has the chops to pull it off. Extraordinary guitar player. Jazz flavors, soul. Gritty blues-rock, rock & roll, with outstanding musicianship.” – Martine Ehrenclou, Rock and Blues Muse, Los Angeles USA, Sept 2018
“There were goosebumps, then tears. Gifted electric guitar play will do that to me”- Blue Monday, USA
“some of the best guitar playing in one place you might hear all year” – DownAtTheCrossroads
Named for the mighty Blackwood River in their home town of Bridgetown, and inspired by its floods, Blackwood Rising are a happy go lucky blues duo who play a raucous mix of originals and bluesy covers. Fingerpicked tunes with bottleneck slide, various guitar tunings, an octave pedal, a double snare drum kit and an aversion to too much technology pretty much sums them up. Blackwood Rising is primarily a vehicle for its two members to immerse themselves in a tribute to the blues sounds that have been in existence for far, far longer. These sounds are dredged up and thumped into a shape that will prove to be a point of difference in the current blues and roots landscape – a landmark that might come in handy amongst so much uniformity.
Stumptown is a four piece Jump Blues band. We deliver the blues the only way we know how; raw, emotional, solid and with a ton of passion.
+ Google Calendar+ iCal Export