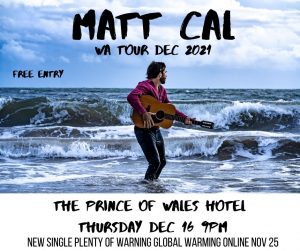 Perth singer songwriter Matt Cal releases his follow up to august 2021 single Breathin’ Slowly.
Where Breathin’ Slowly see’s Matt working with just the palette of an acoustic guitar, voice and some
peaceful, poetic lyrical flow, Plenty Of Warning Global Warming see’s the heat turn up a notch.
Self- recorded and produced in Matt’s home studio and with Fremantle’s Elliot Smith on drums the result is a deeply
grooving, Slide guitar drivin’ piece of contemporary Australian roots music.
“Over the July of 2021 while Perth was drenched under 28 days of heavy, constant rain I found myself on the couch
with an acoustic guitar pondering our climatic circumstance and the plight of the earth as we push forward
as human beans”
“Musically I watched a tonne of you tube concerts over the period and found myself listening
To Ben Howard, Nahko Bull, Sam Garret and Black Pumas amongst others plus I wandered down
many a musical rabbit hole following folk, americana and indie sounds. I felt more inspired than ever
before to write, record and perform”
After a small run of shows in Aug/ Sept I hit the home studio feeling fresh and insightful and set about recording
something warm, gutsy, chill and with a message of unity and a need to stand up for our rights as a people against
governments who seem to only see the power of economies.
“We have known of global warming and our heading for an environmental crisis point
for more than 50 years yet we find ourselves still looking for answers and direction.
In the late 80’s and early 90’s we were faced with a thinning of the ozone layer
but as a population we were able to take measures to remedy this dangerous issue.
I wanted to use that idea to say ” hey we can fix this, we can go carbon neutral
and we can preserve the future of our children and this incredible earth and we will be ok but…. We need to act now”
I want this song to be a solid reminder as a population we need to stand together
in order to have our democratic needs and wants adhered to by national
and international governing bodies. The future is in our hands and it is our children’s
future that is at stake”