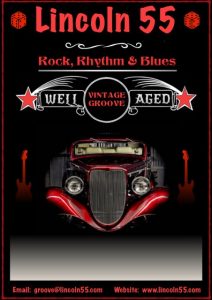 Lincoln 55 is a newly formed 3 piece Swamp, Blues and Rock Band based in the Southwest.

such players as…John Meyer, John Haussentamm and was the Drummer for Psycho Daze and has

with the high profile line up.

Greg Lee Bird ( Guitar & Vocals ) Played Guitar with bands such as The Magnificent Seven, The Vibrolators and Lucky

and has played on many Jingles and recorded music for assorted Documentaries.

to deliver a dynamic sound that is a total reflection of their experience and unique grooves.