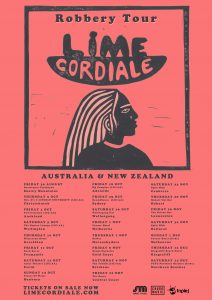 “To see Lime Cordiale live is to see the creative genius of Oli and Louis at play… with colours so vibrant they will seep into your retina, pierce your brain, and finally, imprint on your very soul.’
– GQ MAGAZINE
“Oli and Louis Leimbach have thrown the kitchen sink of funk, folk and synthy electro at their garrulous, sunny indie pop”
– ROLLING STONE

“Some of the most memorable and melodic hooks this side of Abbey Road. Beach Boys, eat your heart out”
– SYDNEY MORNING HERALD

Lime Cordiale recently returned to the airwaves with their brand-new single Robbery which is unveiled alongside the official video (WATCH HERE) Hailing from Sydney’s Northern Beaches, the band’s upcoming tour is set to be their biggest NZ & Australian tour to date with a string of some thirty headline shows. Oli and Louis Leimbach have announced a number of regional West Australian shows due to huge reaction they received in WA on their last set of dates.  Tickets are flying via www.limecordiale.com.

On their last run through Western Australia, Lime Cordiale took their full band and tour outside of Perth to Leederville, Freemantle and Albury.  “Audiences outside of the Australian capital cities are some of the best to play to anywhere in the world,’ Said Oli Limebach. ‘Fans are ready for a big night out and we’re the band to give it to them.’ We’re super excited to be getting down to Bunbury in particular, as we’re huge surf and wildlife fans.  We’ve heard so much about the area and can’t wait to come down and have a few beers with the locals.”

Of the wildly infectious soul-pop jam Robbery (which premiered via the triple j Good Nights), Louis Leimbach says “I love the 60’s feel to the song. The whole song could just be a baritone sax and a snare and all the main elements would be there. The song all started with that line: “Hey, there’s been a robbery”. When you meet someone, even just for a moment, they make an impact and then they’re gone. You’re left feeling robbed. You feel as though you need to find them somehow but it’s no use.  We played the song at pretty much every show throughout Europe. We slipped it in as a little secret addition, and it felt great even though no one knew what the hell was going on.”

The music video was filmed over seven countries whilst Lime Cordiale were on their recent six-week run of the UK and Europe. In between shows and long drives, the band and their long-time videographer, Jack Shepherd, would find any spare moment they could to race around and filming scenes for the clip. In typical Lime Cordiale fashion, as seen in recent clips for Money & Inappropriate Behaviour, the band superbly play out the starring roles in yet another hilarious plot. The Robbery video follows a broken-hearted Louis Leimbach to some of the most iconic landmarks and vistas across Spain, Ireland, France, England, Netherlands, Belgium and all the way home to Australia as he searches for romance.

The brothers Oli and Louis Leimbach who are responsible for delivering us glorious hook-laden jams such as Inappropriate Behaviour, Money and  Dirt Cheap which landed at #86 in triple j’s 2018 Hottest 100 and combined boast over 50 million streams, have been winning over fans all over the world and gaining huge momentum internationally.

In a major boost for their burgeoning international career, it was just announced last that Lime Cordiale have been signed by multi-platinum selling global megastar Post Malone and his manager Dre London to a co-management and label deal with Sydney-based Chugg Music. London and Malone recently set up a new company together called London Cowboys. Also, having just wrapped up a mammoth six-week run of UK and Europe tour dates, including sold-out headline shows at venues such as O2 Academy London, Paradiso in Amsterdam, the band only just set foot on home soil before they jetted back off to the US to play some more dates in Los Angeles and New York City including the iconic Mercury Lounge next week.

+ MORE TO BE ANNOUNCED