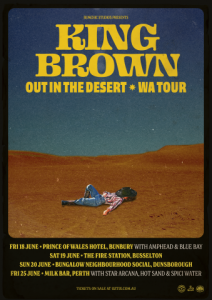 After setting solid foundations in a disrupted 2020, King Brown are set for their biggest year yet.
The last 12 months have consisted of multiple sold-out headline shows, breaking through to major Spotify
editorial playlists, national radio play and getting down to work in the studio to complete their first EP ‘Out In
The Desert’. (Releases June 18th 2021)
A big milestone was single ‘Bones’ breaking through for the band’s first spin on Triple J airways, closely
followed by the single, ‘Way Down’, off the EP, getting some love on the platform.
2021 sees the band release this Debut EP, a compilation of songs from their beginnings as a band, all the way
to where they are now. The EP Ranges from high energy, punchy classic rock songs, smooth cool tunes for a
Sunday drive and even upbeat numbers to get everyone dancing.
King Brown are a four-piece blues Rock inspired band out of Fremantle Western Australia. Brothers Ash
Kennedy (lead guitar) and Shaun Kennedy (Rhythm Guitar), Brendon Cross (Vocals/Drums) and Ben Salmin
(Bass) make up King Brown. Their music is inspired by artists all the way from Californian surf rockers Allah-
Las to the Rolling Stones.
Keep an ear out, the future is bright for King Brown
“Plenty to love here. That you’re (the band) into the Allah-Lahs is one. That searing guitar is another. I’ve got
about 12 more, but that will do for now.” – Richard Kingsmill, Triple J
“Fremantle’s King Brown combine classic rock with a modern indie sensibility in a way that is sure to intrigue
and tantalise fans of both styles”. – Dan Condon, Double J
TOUR DATES
FRI 18 JUNE PRINCE OF WALES HOTEL, BUNBURY WITH AMPHEAD & BLUE BAY