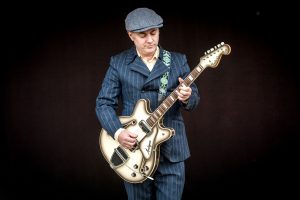 Melbourne based guitarist-songwriter-vocalist-producer, Jeff Lang has built a reputation for making startling music that is accomplished, intricate, gutsy, melodic and loaded with soul. Often taking unexpected turns, he has consistently inspired his audiences by creating a stylistically diverse catalog of over 25 albums.

As legions of journalists have written, Jeff is not one to be easily pegged, though in a general sense it’s fair to say he largely trades in roots-oriented rock; but reaching far wider in collaborations with the likes of roving guitar anthropologist Bob Brozman, American blues-rocker Chris Whitley, India’s desert-dwellers Maru Tarang and world music virtuosos Bobby Singh and West African Kora genius Mamadou Diabate. Jeff’s work with the latter won the 2010 ARIA for Best World Music Album, while he and Brozman took one home for Best Blues and Roots Music Album in 2002. Jeff received that same award on his own in 2012.

Jeff has mischievously called his music ‘Disturbed Folk’ but taking an overview Jeff’s lengthy career, we can see a driven man who keeps his head down, playing and recording music as if his very life depends on it.

“Lang’s only reference point is himself, a unique singer-songwriter-guitarist who follows his own path”
Le Soleil, Quebec