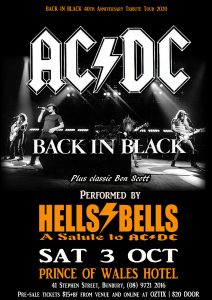 Hells Bells is back…Black In Black baby. On tour from Bunbury to Broome and all stops between.
Now with one of Perth’s finest singers Sal Abate, a consummate experienced performer with a voice to rival anyone who’s ever done Bon Scott and Brian Johnson proud, Hells Bells will be performing the entire “Back In Black” album along with the very best of the Bon Scott era songs to celebrate the 40th Anniversary of AC/DC’s biggest selling album.

Back In Black was released 25th July 1980 and is the world’s best-selling rock LP of all-time.

Hells Bells is not your average tribute band. No dress up, no bull, just honest accadacca rock n roll by a band of seasoned Perth industry legends.

Formed in 2005, Hells Bells is Perth’s longest serving and most electrifying AC/DC salute band playing all the greatest hits of both the Bon Scott and Brian Johnson eras from TNT thru to Thunderstruck and beyond.