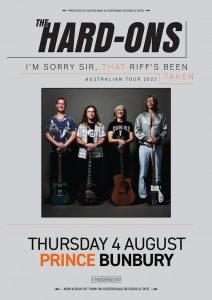 ANNOUNCEMENT FOLLOWS THE RELEASE OF “LITE AS A FEATHER”, THE SECOND SINGLE – AND VIDEO – FROM FORTHCOMING NEW ALBUM I’M SORRY SIR, THAT RIFF’S BEEN TAKEN

“The Hard-Ons were and still are amazing” – Warren Ellis (Dirty Three/Nick Cave & The Bad Seeds)
“(The Hard-Ons) should be in the ARIA Hall of Fame!” – Dave Faulkner (Hoodoo Gurus)
“The Hard-Ons are trailblazers!” – Jello Biafra (Dead Kennedys)

Following the fantastic response to new single “Lite As A Feather” and its predecessor “Hold Tight”, and amid the great anticipation for their new album I’m Sorry Sir, That Riff’s Been Taken – their first with new singer Tim Rogers – Australia’s punk legends the Hard-Ons have announced their first tour with their new line-up.

Whilst the announcement last month of Rogers’ recruitment was met with excitement, bemusement and yes the inevitable few grumbles from old fans, the new line-up is not going to give fans anything to complain about.

Both new singles suggest the band is in magical form; in fact the magic comes at least in part from the fact that Tim Rogers is one of the band’s biggest fans. As he recently told Blunt:
“I’m a fan first and foremost. [They were] the first band I loved that I could see, the first band I got my nose broken to, [and the first band] I lost my hearing to. There are so many firsts. And then to be in the rehearsal room… I looked over at Blackie’s amp and went, ‘Oh, that’s the amp.’ And I saw the SG, and I was like, ‘That’s the SG.’ I’ve been watching him play with those since 1986.”
Get ready and get excited, because this is Aus rock’n’roll and punk rock history being made right now!