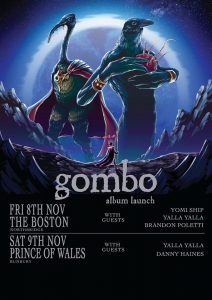 Perth based Alt/Prog Rockers gombo are back after a short hiatus. The lads have been sitting on a nest egg that is their debut album titled ‘Mu Cephei’ and right now it’s ready to hatch. This unpredictable machine has refueled, tightened all its bolts and is ready to take you on a rollercoaster that will try to throw you out…. so hold on tight. With a new weapon behind the drums, Mr. Daniel Bell, the revs are running high and the foot isn’t coming off the gas anytime soon. Digital release date of this 10 track behemoth is Friday October 25th on all streaming platforms with the first single dropping Friday September 20th. Two massive nights are booked for the album launch also, so don’t miss out on the chaos that is gombo.