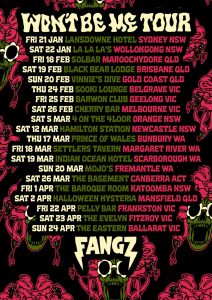 FANGZ is a Sydney-based four-piece punk rock band that write songs with the sole purpose of getting people to party and attempt backflips in mosh pits.

Since their 2019 inception, FANGZ have released two EP’s ‘For Nothing’ and ‘But No Thanks’, both of which were praised by tastemakers and fans alike.

FANGZ latest single ‘I Don’t Like Me’ is out now.