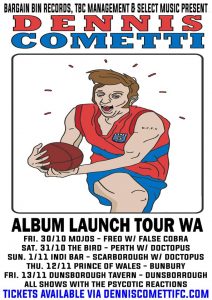 When you use the namesake of one of the greatest sporting commentators of all time for your band, you better get it right. In the words of Dennis Cometti (The Man) “Watch out for these boys, they will be climbing the charts like a pop up toaster”, you better believe it.
Dennis Cometti (The Band) formed as a side projects side project. Mitch (Drums) and Alex (Guitar) played their first shows as a two piece at the Osborne Park bowls club in 2014, as a way to scab free beer when not playing with their other bands Aborted Tortoise, Paranoia’s and Ghoulies.
Later John (Bass) also from Aborted Tortoise, decided to get in the scam and joined the band full time, rounding out the current three-piece lineup.
The self-confessed low achievers took their DIY attitude and made some of their first recordings on a 4 track cassette. One such recording used as a final assignment in a sound course at uni gave Alex a solid pass, meaning somehow he hadn’t wasted the last 12 months of his life, much to the pleasure of his parents.
Fast forward to 2018, Dennis Cometti released two EP’s digitally “On The Sauce” and “Wooden Spoon” both tributes to their namesake Dennis Cometti (The Man).
Since then, the boys have toured some of Western Australia’s finest venues touring with the likes of Cosmic Psychos, The Chats and Pist Idiots, not to mention doing their own headline shows throughout the state.
They lucked out whilst on tour, when The Chats asked the boys if they could release their debut full length record on their very own label, Bargain Bin Records.
Dennis Commetti (band) have a huge 2021 with upcoming tours of Europe, UK and the east coast of Australia already confirmed. They have committed to explain AFL football to Europeans and why they choose to wear cut off sleeves.
Dennis Cometti Self Titled Debut Album available 23rd Oct 2020 through Bargain Bin Records.