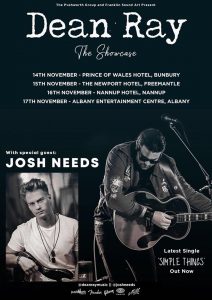 DEAN RAY HITS THE ROAD in WA ON ‘THE SHOWCASE’ TOUR

Singer/Songwriter, Dean Ray hits the road in November with special guest Josh Needs.  This is the second leg of a national tour, after a successful Queensland tour in August in September.

Dean will be his No. 5 ARIA / No.1 iTunes Chart topping hit ‘Coming Back’ from his self titled ARIA Gold status album along with songs from ‘The Messenger’ his second album. He will showcase his new single “Simple Things” a song that is part of the soundtrack for a groundbreaking Australian film called “The Show Must Go On” dedicated to raising awareness for the incredible struggles by Artists in the Australian Performing Arts communities.

Hailing from Meandarra QLD, Dean has music in his veins and travelled the country performers highway from a very young age with his musician parents.  Starting out playing the drums soon led to guitar lessons from the age of 13 and, a natural ability to write songs.  Breaking away at age 16, Dean has worked tirelessly at honing his craft, writing songs from a myriad of experiences on the road and touring both here and internationally. In 2014 Dean was runner-up on the sixth season of The X Factor.