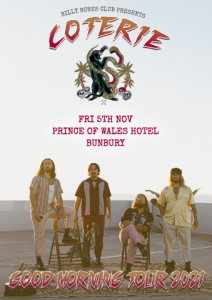 Coterie will be performing their electrifying live show across some of WA’s best live venues in promotion of their soon to be released 6th single ‘Good Morning’ along with as fan favourite’s like ‘Where we began’ and ‘West Coast Drive’.

Check out Coterie and special guests at a date below: