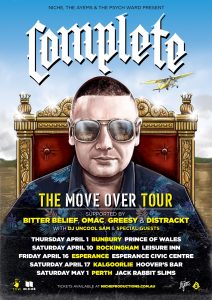 Following the huge success of his latest single Move Over, a braggadocious ballad that only the most ultimate of emcees could attempt to write, Complete, also known as the king of everything, is now going to celebrate by obviously headlining his own Western Australian tour. He will also be bringing some friends, of which he has many because he is such a likeable person. This tour will probably be the greatest example of live music the world has even seen and it would be very unfortunate if you missed out on it. You would no doubt regret it for life. I would also like to point out that Complete wrote this press release himself in third person, which is probably why it is so well written and better than any other rappers press releases. My pleasure. See you all soon.