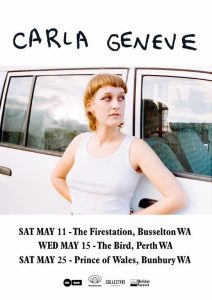 Witnessing Carla Geneve in performance is akin to a sermon of fire and brimstone: it

is an absolute sensory commandment of flesh and blood attention. The naked
vulnerability underpinning the immediacy of her songs is emboldened by the raw and
unbridled energy of her live shows that have captured the imagination of audiences
across Australia. “Music is a very pure form of connection between people,” Geneve
muses. “The best feeling is when I’m playing and the energy bypasses my brain… it’s
like you’re just being, and the audience is right there with you.”
Hailing from the small coastal town of Albany, some 400 kilometres south of Western
Australia’s capital city of Perth, Geneve cut her teeth playing solo shows in and
around regional centres as a 16-year old. These formative experiences proved
invaluable, and after relocating to Perth, by the end of 2017 Carla had been
nominated for multiple Western Australian Music Awards, including Most Popular
New Act, and Best Regional Act (which she won).
Her first official single, ‘Greg’s Discount Chemist’ (March 2018), bristled with an
open-hearted clarity and ragged playfulness that immediately resonated with
audiences. Garnering over 400,000 streams on Spotify, the single’s success led to
Australia’s leading national radio station Triple J crowning Geneve as their
Unearthed Feature Artist of the Week. She subsequently embarked on her first
national tour, playing to packed houses in Melbourne, Sydney and Perth.
After earning rave reviews for an electrifying showcase at the annual BIGSOUND
conference in Brisbane, key support slots followed for the likes of Gareth Liddiard
(The Drones/Tropical Fuck Storm), Cat Power & Kurt Vile as well as performances at
festivals such as Falls Festival & Laneway Festival. Geneve then announced her
signing to Remote Control/Dot-Dash Recordings in February 2019, subsequently
releasing a new single, ‘2001’. This was placed into high rotation on Triple J, and also
featured on Matt Wilkinson’s Beat 1 show on Apple Radio. A rapturously received
national tour followed, resulting in ‘2001’ claiming the #1 spot on the AMRAP
Australian Community Radio Charts.
Upon returning to Perth, Carla put the finishing touches on her first, eponymous EP
at RADA Studios. Borne of smouldering passion and framed by lacerations of
heartbreak, the self-titled EP places her direct and compelling lyricism front and
centre without sacrificing the dynamism so central to her live performances. “I
wanted the EP to reflect live shows over the past year or so that we’ve been playing.
I’d say live performance is where I am most comfortable. I’ve always liked the
vulnerability in imperfection. Hopefully that comes out in these songs.”
The arresting new single ‘Yesterday’s Clothes’ reflects a “realisation that you’re
falling out of love with someone, and then feeling guilty about it, even though that’s
the sort of thing that you can’t avoid”. The single will be released on May 9 prior to
the release of the self-titled EP on Friday June 7 via Remote Control Records/Dot
Dash Recordings. Geneve will then embark on her first North American tour in
support of San Cisco, playing shows in Los Angeles, Minneapolis, Toronto,
Washington DC, Philadelphia, Boston, and New York City.
Instagram – www.instagram.com/carla_geneve
Facebook – www.facebook.com/carlagenevemusic
Spotify – https://open.spotify.com/artist/0UzJFZTzFyN6EYjenzezfT
Soundcloud – https://soundcloud.com/ca