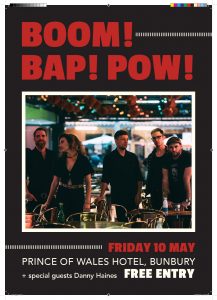 Perth Rock n’ Soul merchants Boom! Bap! Pow! are a band that know how to work their crowd the old fashioned way. They’ve spent the last few years clocking up kilometres and appearing on just about every stage on offer. Give them a few planks of wood to jive on and an audience to sway and Boom! Bap! Pow! will put their heads down and get down to business. The rest of the country has also fallen for their lightning-in-a-bottle style as they’ve toured with the likes of Eli ‘Paperboy’ Reed and Royal Crown Revue, played huge national festivals such as Queenscliffe and Laneway and won a multitude of plaudits far and wide.

Two years on from the release of sophomore album So Heavy, lead single ‘Suit’ is showing no signs of going away. After being selected by the the likes of Bonds, Value City Furniture (US) and GILT the track has recently been commissioned by Diet Coke and Microsoft for their respective Economy Class and Surface Pro 23 campaigns, which has seen the 2013 WAM Pop Song of The Year award winner connect with a worldwide audience. Currently sitting on 200,000 views Youtube Views, over 55,000 stream, 8,000 plus sales, 18,700 Shazams Suit is showing no signs of slowing down as it makes it’s way around the world like the little song that could.

Currently working on the follow up to So Heavy, Boom! Bap! Pow! will be hitting the studio and touring extensively, including international dates, as they head deeper into 2015. Be sure not to miss the amalgamation of celebratory sounds and undeniable hooks that Bull and her tight-as-a-drum cohorts prove their reputation on.