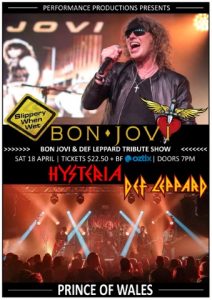 SLIPPERY WHEN WET is the ultimate tribute to one of modern music’s most enduring bands BON JOVI, performing all of the Greatest Hits in a power packed musical spectacle. Since the band’s conception in 2013, they have taken their act overseas to perform two nights at the famous BEERFEST ASIA FESTIVAL SINGAPORE in 2016 & 2017, along with a string of sold out events. In 2018 a special performance for the Darwin Cup, as the band continues their run of sold out shows.
HYSTERIA is the ultimate tribute to one of Rock’s most iconic bands DEF LEPPARD. Performing all of the Hits in a powerhouse set, HYSTERIA deliver a massive live show with stunning attention to musical detail. Bringing you all the Classic Hits including Pour Some Sugar On Me, Love Bites, Animal, Rocket plus many more…so if you’re ready and willing, ask yourself one question…DO YOU WANNA GET ROCKED???
Don’t miss this huge Classic Rock Spectacular at the Prince Of Wales Bunbury with Slippery When Wet, Hysteria, & Special Guest.