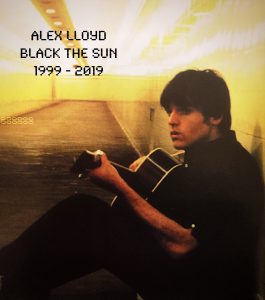 A reminder – we urgently need ticket links to set up on our end. Please send ASAP

Beloved Australian singer-songwriter and multi ARIA winning artist Alex Lloyd has announced he will commemorate the 20th anniversary of his 1999 debut masterwork Black The Sun
with a series of National shows this October & November featuring the album’s original line-up, and for the first time ever, the entire double platinum-selling record played in full.

When Alex Lloyd dropped his debut album Black The Sun in 1999 it was on an unsuspecting public that quickly fell for and embraced the quirky collection of electronica inspired pop
gems he had crafted with producer and Psychedelic Furs member, Ed Buller. Under the producer’s guiding hand, Lloyd’s deft amalgam of exploratory electronics and heartfelt bedsit
balladry – which included the singles “Black The Sun”, “Lucky Star”, “Something Special” and “My Way Home” – went on to win triple j’s album of the year and the
ARIAs for Best New Artist and Best Male Artist, igniting a long-lasting affair with a nation of music lovers and critics alike.

On its release Black The Sun virtually came from nowhere bringing with it a new artist who seemed to be pulled from the ether with his craft already fully formed on arrival.
Though Lloyd had been treading the boards since his teenage years (and later at local pubs with the likes of early bands, The Beefs and Mother Hubbard), this new Alex Lloyd
chapter was something different entirely … assured, accomplished and with its electro textures, perfectly timed for the zeitgeist. From nowhere all of a sudden it was everywhere,
dominating the nation’s airwaves it peaked in the top ten of the ARIA  national album chart and stayed in the top 50 albums for 28 weeks achieving further accolades & international
recognition via the inclusion of the single ‘Lucky Star’ on the hit Australian movie ‘Two Hands’ (starring a young Heath Ledger & Rose Byrne) and album track ‘Snow’ appearing
on US horror flick ‘The Scream 2. Rose Byrne also made one of her earliest ‘starring’ roles appearing in the video for ‘Black The Sun’.

The incredible success of Black The Sun provided a lofty launching point for Lloyd’s career with the album’s follow up Watching Angels Mend ringing up triple platinum sales and
featuring the now classic Australian songbook staple and advertising executive favourite “Amazing,” which took out triple j’s Hottest 100 and won Lloyd another Best Male Artist
Aria in the year 2002. His next album Distant Light continued his impressive run of successful long-players achieving gold status off the back of the trio of singles including
“Coming Home”, “1000 Miles” and “Beautiful.” An impending move to London came with his self-titled 2005 album which again sold in platinum numbers.

Since 2008’s Good In The Face of A Stranger, and including 2013’s Urban Wilderness and the stripped-back Acoustica in 2016, Lloyd has followed a more autonomous path
choosing to release both his own albums and various projects via indie distributors while continuing to deliver work that showcase his gifts as a writer and performer. Whilst he has
toured sporadically throughout the 2010’s, this anniversary tour for Black The Sun (which includes the festivals Scene & Heard festivals across the East Coast) will comprise some of
his biggest shows since the release of his watershed album and indeed the only chance fans will have to relive in a live setting with full band, the magic moments that made that album
so special for so many. And to coincide, EMI Music will be releasing a special deluxe 20th anniversary album edition of ‘Black The Sun’ featuring a bonus collection of tracks recorded
Live At The Wireless via Triple J from the era.

Special International Guests for the tour will be Canada’s exciting multi-instrumentalist young brothers, Mickaël and Raphaël Fortin collectively known as HEY MAJOR having
scored many accolades in their home country since their inception in 2015.

In conclusion, Alex comments why he felt that the time was right to celebrate his lauded debut
“It’s hard to believe its been 20 years! A lot has happened in that time, however  this album still resonates with me maybe even more so now.
That’s why I am super excited to announce I am getting the band back together to head out on the road
again to celebrate Black The Sun on its 20th anniversary.
Full band shows, all the bells and whistles, relive my 20’s … hell yes! “