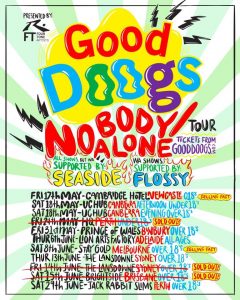 We haven’t been on tour yet in 2019, so we are taking our single “Nobody/Alone” around the country to drink everyone’s beers, this time in Bunbury. Jump on tix early, they’re not gonna last long. FLOSSY just announced as main supports and local lords Pretty Uglys will be opening up the night!

After the success of last single “Want That” finishing #199 in Triple J’s hottest 200, “Nobody/Alone” is the follow up track that steps it up again for the band. Its a fast-paced bop that puts a lighter spin on the crippling effects of anxiety, while still managing to be catchy af. Listen to it now on Spotify 🙂